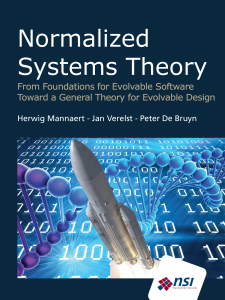 Modularity is a cornerstone of engineering and design, and often man-made artefacts exhibit some kind of plug-and-play behavior associated with modularity, ranging from houses and cars to software and business processes.  However, when examining the evolution of modular structures under change, a far more complex behavior becomes apparent. Some modular structures are impressive examples of evolvability, whereas others seem to severely lack flexibility, from software systems requiring ever increasing maintenance budgets, to the massive investments required to develop a new airplane which is seemingly merely a larger version of an existing model.

Based on well-known engineering concepts such as systems theoretic stability and thermodynamic entropy, and by applying plain combinatorics, Normalized Systems Theory explains the reasons behind these widely differing behaviors, and proposes an innovative way to construct modular structures that are drastically more evolvable, flexible, scalable and sustainable, than those currently known to mankind.

In a first part, an overview is presented of the theoretical foundations that are currently available for the engineering and design of artefacts and systems in general.  In a second domain-specific part, these foundations are applied to engineer in a systematic way software programming structures.  It is shown that current technologies and tools do not enable software engineers today to provide the levels of evolvability required in the ever faster changing world we currently live in. In a third and crucial part, the Normalized Systems Theory for the engineering and design of evolvable modular structures is developed.  In a fourth and final part, the derived theory for evolvable design is applied, and initial examples of “evolvable modularity” are provided in different domains. Ranging from software systems, over business process analysis and accounting systems, to housing, roads and transportation systems, the potential of evolvable modularity seems extremely promising, if only because it is related to some of the most pressing challenges our society faces: scalability and sustainability of man-made artefacts.

We gebruiken cookies om je de beste ervaring op onze website te geven. Als je deze website verder bezoekt, gaan we er vanuit dat je dit ok vindt...
We use cookies to ensure that we give you the best experience on our website. If you continue to use this site we will assume that you are happy with it...OkNee - No